When driving a racecar, there is no place for faith. If you look at your brake lines and see they are cracked, you don’t blissfully head on to track because you have faith in the almighty that everything will be okay. The consequences of such an oversight could be harmful if not fatal to you or someone else. Similarly, if you’re a safety marshall and you see that someone has their harness straps under their HANS device, you don’t say a silent prayer for them while sending them on their way, you stop them right there!

OTP (on track praying) is a term I made up for spinning when dropping 2 wheels off track. Why is this called OTP? Because it’s like cracked brake lines or messed up harnesses: obvious and avoidable. You know you’re approaching the edge of the track long before you actually leave the asphalt. That moment you realize you’re running out of room is just like observing cracked brake lines. It’s time to do something about it. That something is not hoping everything will be okay. Yet that’s what a lot of amateur racers do. They keep the steering wheel and throttle fixed and hope the racing gods will take care of them. I have for news for you. The racing gods are unkind.

In the video above, the text reads “Once that left rear goes in the dirt it’s all over…”. Yeah, if you’re cornering at something around 1.0G and your outside rear tire can only sustain 0.6G once it hits dirt, you’re going to spin. But you don’t have to corner at 1.0G. There is an alternative. You could corner at 0.6G and then you wouldn’t spin. How can change from 1.0G to 0.6G? OPEN THE WHEEL. Go off track on purpose and under control. Don’t hope that you will stay on track. Hope is forsaken in these lands. Be proactive and do something about the problem before it becomes a disaster for you and other people.

The problem with OTP is that it’s nearly impossible to practice live. You can’t go to an HPDE session and constantly drive off track. And you can’t (legally) slide off the road on your daily commute. So what can you do? The least expensive is to role-play. You can do this entirely in your head. Imagine you’re about to go off track. Right before your tires hit the dirt, picture yourself unwinding the wheel so that you go off track in a straight line. For a little more realism, pretend you’re holding a steering wheel while watching the video above. Open the wheel to prevent the spin. For an even more authentic experience, get a simulator.

When coaches talk about driving techniques in the classroom, the conversation generally begins with the racing line. This is broken down into 3 component parts: turn in, apex, and track out. I find that students really latch onto the apex as the most important part of the corner. It might be the most obvious part of a corner, especially when coaches stick an orange cone on the track, but the apex is not the most important point. The apex impression apparently stays with them a long time, because even advanced drivers have a tendency to focus on the first part of a corner and have no idea what the second half of a corner is supposed to feel like. That’s the subject of this Chalk Talk.

One way to think about a simple 90° corner is that it has 2 parts: a small radius in the beginning and a large radius at the end. The only way to get from a small radius to a large radius is to UNWIND THE WHEEL. That is, if you’re in a right turn, you have to steer back to the left when you want to increase your speed. When should this happen? No, it’s not the apex.

In the diagram below, the green arrows labeled “1” and “2” have different radii. Curve 2 has a radius about twice as large. The break between the arrows is called the nadir of the corner. It is the point of lowest speed on the racing line. It’s the point where you transfer from brake to throttle and the point at which you start unwinding the wheel. It is the most important part of the corner. Unfortunately, it’s not so easily labeled because you can’t stick a cone on it. Yeah, racing is hard. 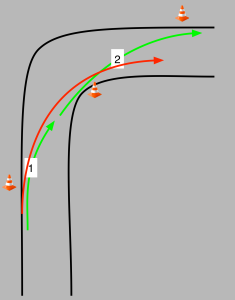 The red line traces a constant radius. Lots of advanced drivers are actually on this line even if they disguise it. They corner at constant speed and then add throttle after the apex. They may even obediently steer out to the edge of the track in the belief that they are on the racing line… they are not. The racing line isn’t just where the car goes, but also how the car goes.

We interrupt this blog for an important announcement. YSAR is now available on Kindle! You Suck at Racing: a crash course for the novice driver. Unlike the blog, the book focuses more on what you’re supposed to do rather than what you’re not supposed to do.

Turn 9 at Willow Springs is a bit of an adventure. It’s a decreasing radius turn from a blistering fast sweeper onto the main straight. If you come in a little too hot and find yourself running wide at the exit, you have 2 choices (a) hold on to your line and say an on track prayer (OTP) that you make it or (b) open the wheel (OTW) and go off track intentionally. OTP is like procrastination. It’s a bad habit that reinforces its use when everything goes okay. “Thank god I made it” is no way to drive a racecar. Unless you want to end up like this.

It’s much better to open the wheel, zero the steering, and slow the car down under control. LTD.