I normally mount cameras to the roll cage. It’s stable and I like having the camera positioned in the center of the car. In a car without a roll cage it’s more of a challenge, and one solution I’ve seen is to mount a camera support to the headrest. I looked at several designs and decided I could make one. I came up with the design below because I had some box section aluminum and RAM mounts lying around. I got the J-hooks and twist knobs at the local Ace Hardware. Wingnuts would have been much cheaper, but I hate twisting those things. The hooks were a bit long, so I trimmed them with an angle grinder. Overall, it’s very sturdy, and inexpensive. 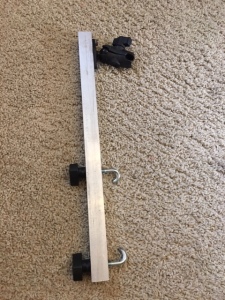 My G25 shifter is old and having problems. So I decided to build my own shifter from an arcade kit. The last time I built a USB controller it was a lot more expensive and complicated. The one I got was $22 and included the stick, 8 buttons, and a USB board. I mounted the stick and one button to a scrap of bamboo flooring. The shifter works okay, but I wish the return spring was a bit more robust. Ultimately, it works just fine, and it was a fun project. However, if I was doing this again, I would look for something more robust. 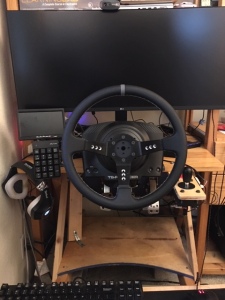