The last race of the year for me is just 1 week away. I love racing on the 5 mile track and I love Lucky Dog Racing League. I just checked the supps and was met with a bit of a shocker. At some point I believe this race was advertised as running the second day in the reverse direction, but somehow that changed. That’s a real bummer. I was looking forward to that. Or maybe I’m mistaken and that came to me in a dream. Sometimes I confuse dreams for reality. I have a funny story about that…

I don’t follow politics at all, but early in the Obama presidency I remarked to a friend that I thought it was a really smart that Obama’s VP was blacker than he was. That way people wouldn’t assassinate him for fear of the next guy in line being even more threatening (or whatever). That was something I dreamed because apparently Joe Biden is actually white. Back in the 70s, Saturday Night Live used to do skits where Garrett Morris played Mondale as VP. The joke was that Mondale was so easily overlooked that nobody realized he was black (Garrett Morris). Anyway, I had somehow confused Garrett Morris, Walter Mondale, and Joe Biden. Then again, there are people who would say that Obama is actually whiter than Biden… so maybe I had it right all along. I try to steer well clear of political content on this blog, so apologies for this short political interlude.

Speaking of dreams, wouldn’t it be awesome to get Randy Pobst to drive a stint in my car? Well, it turns out, he’s going to be at the race and he’s going to be driving various cars. I immediately sent an email to HQ to sign up for this, so it may happen. That would be a dream come true. If it does, I’ll be sure to post some video and telemetry analysis. I’d love to see how much better Randy drives. 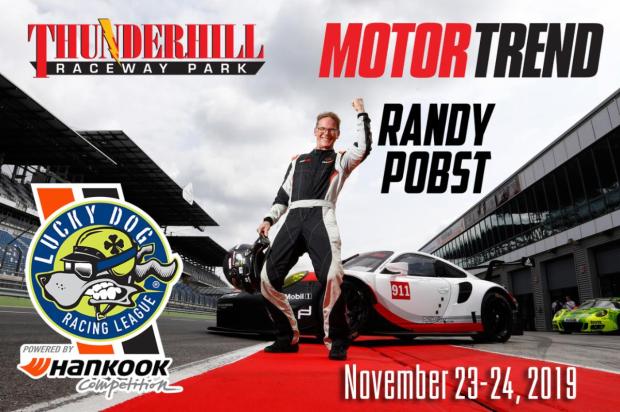 As it turns out, the Yaris requires minimal prep, and there really isn’t much to do between races. The car is amazingly robust and simple.

So what’s the packing list look like? Some things are large and bulky, like tires, but I also have lots of “kits” that aggregate related items, which makes packing and storing simple. I can generally get everything ready to go in a half hour.

The Lucky Dog Racing League is now sponsored by Hankook, and part of that arrangement is that the Hankook RS-4 is THE tire for the racing series. In order to get on the podium you have to run that tire. Ultimately, this is a fine thing, because it saves money on average. The RS-4 is a great endurance racing tire that has a combination of grip and longevity that is hard to beat. In very rough terms, they are a couple seconds slower than the cheater 200s like the RE-71R, but last 2-3 times as long.

Given that my car isn’t 15 years old, meaning I may get classed in Super Dawg, and is slow even for a C class car, it’s unlikely I will get anywhere near the podium. So the tire rule doesn’t really impact me. That’s good because I have several tires to burn through. This is what I’m bringing to the race.