The first ever YSAR author contest ends in a couple weeks. Click the contest link at the top for information how you can win prizes by writing for this blog. Give it a try. It will be fun and informative.

As you may know, this is November and therefore national novel writing month. A few years ago I wrote a novel about racing called Ghosting the Aliens. No, you can’t find it on Amazon or anywhere else for that matter. A novel written in one month isn’t worth reading! The title is a phrase I use for being able to virtually ride along (ghosting) with the fastest drivers (aliens). This is the first in series of blog posts that will focus on reading telemetry data.

You can improve a lot just by comparing your laps to each other. But in order to take your driving to the next level, you have to examine the inputs and outputs of faster drivers. Warning: this can be pretty humbling. You may find yourself 10 seconds behind the leaders. But don’t worry, they started out just like you. All you have to do is learn how to drive. And if you’re 10 seconds behind, let’s be frank, you really haven’t learned how to drive.

So where do you get these embarrassingly fast laps? Real life simulation data is hard to come by because not everyone runs telemetry in their car. And a driver’s telemetry data is sort of their intellectual property. They might not want to give it to you. But even if you do have real life telemetry data, the variation from car to car and from day to day means that analyses may not be very robust.

One of the great things about simulation is that we can lock down the weather, the car, the setup, and focus completely on the driver. You can prowl the forums at iRacing, Assetto Corsa, rFactor 2, etc. and ask people to upload telemetry data somewhere but you probably won’t get many takers. Just like other forms of racing, almost nobody willingly shares their secrets. Thankfully there are a few sources that sort of enforce sharing. Let’s introduce a few of them.

You may have noticed the iRacing bias here. That’s because iRacing currently has the largest market for competitive online racing. That may change soon when Assetto Corsa Competitzione is completed, but for now iRacing is where we’re going to find telemetry data.

Go to the iSpeed website and download the latest build. After installing you will have two new applications, iSpeed and iSpeedLapAnalyzer. We’re only going to be using iSpeedLapAnalyzer. Launch the application and then click on the File menu to load laps into the Lap 1 or Lap 2 slot. We’ll put a fast driver in Lap 1 and compare some slower drivers to that.

Use the menus at the top to select the Global MX-5 Cup series and the 2018 Season 3 season. This series uses the same fixed setup as the time attack from two weeks ago. The laps are sorted by lap time. The fastest lap, 1:39.681, is from Alex Czerny. Let’s load that.

Now click on the Driver column to sort by driver. Scroll down to Bastian Stirl and load in his fastest lap, a 1:46.248. Once you have a local copy of the file, it shows a floppy disk icon like the image below.

Now let’s take a look at the squiggly lines. Drag your mouse over one of the traces and it will highlight that portion. In the image below, I’ve highlighted T3, which you can see on the track map. You can resize the various columns if the map is too small or large. 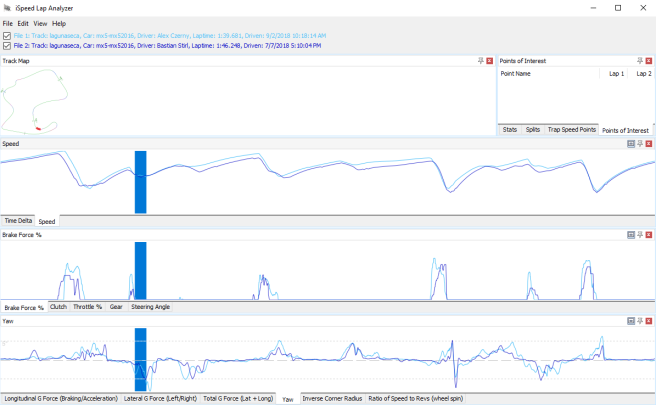 Examine these traces using the various tabs at the bottom of each pane. See if you can figure out what Bastian needs to fix. Note that Bastian’s account is pretty new and he’s a rookie, so he’s not expected to be fast yet. He’s going to have to put in his hours just like Alex did. Unlike a lot of rookies who don’t even know what telemetry is, Bastian is using iSpeed and is therefore a step or two above the others. Over the next couple weeks we will be dissecting inexperienced and experienced drivers to get a closer look at the anatomy of speed.