Last week I presented a mathematical model for cornering that breaks up a corner into 5 distinct phases. I also presented 5 different racing lines: geometric, late apex, early apex. rally, and false late apex (FLA). All of these lines trace a large radius through the corner: they start at the outside, touch the apex, and then track out (some more than others). 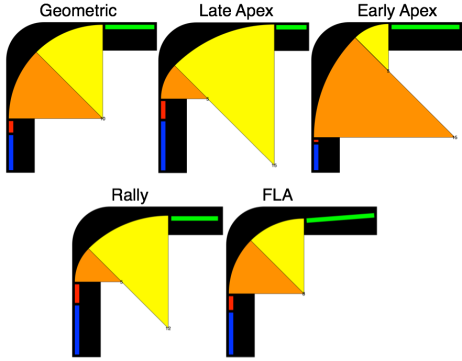 Which one is fastest and by how much? To answer these questions, lets consider two parameters: the grip of the tires and the acceleration of the car. We can express both of these in terms of Gs. We’re used to talking about the grip of tires in Gs, but the straight line performance of cars is usually expressed in terms of horsepower, torque, 0-60, 1/4 mile, or even power:weight ratio. It’s important to note that the grip of the tires limits acceleration. For our purposes, we will consider G-forces of 0.9G or less (typical 200 treadwear tires). To get more than that, you need racing slicks, downforce, or combination. In the table below, I’m simplifying data from some Car & Driver and Edumunds tire tests.

Miatas and Corvettes are racecars, so let’s consider what the best racing line is on a race track. Both cars have plenty of traction (0.90G) but they differ in power. Miatas have a hard time spinning their tires on a corner exit yet a Corvette can do so easily. For our purposes, we’ll consider a Miata at 0.3G acceleration and a Corvette at 0.9G.

The Miata optimally navigates this imaginary corner in 24.87 seconds on a late apex line. The rally line is next best at 25.10, followed by the geometric (25.34), FLA (25.34), and early apex (26.26). The main difference between the late apex and rally line is how much unwinding there is. Not unwinding fully (rally line) loses 0.23 seconds in a single corner. Even worse, the typical HPDE FLA line is nearly a half-second off. There is an important lesson here for momentum car drivers: unwinding through the 2nd half of the corner is really important! And by unwinding, I mean that the tires have to be sliding just as much in the 2nd half of the corner as they did in the first half. Steering out to the track exit is not unwinding. That’s the FLA line.

The situation in the Corvette is a little different. Shockingly, the fastest line is the rally at 23.66 seconds followed 1/100th of a second later by the late apex (23.67). Why is the rally line marginally faster? It’s shorter and the car is straighter sooner. Amazingly, the FLA line (23.68) is only 1/100th behind the late apex. This is followed by geometric (23.73) and early apex (23.88). In the Miata, the difference between the fastest and slowest lines was a whopping 1.39 seconds, but in the Corvette it’s only 0.22 seconds. When the power of the car exceeds the grip of the tires, the racing line doesn’t matter as much (unless you really mess it up). If you see large differences in lap times in powerful cars, it might not the racing line. It could be how well the driver senses/fears the limit.

On snow, traction is severely limited, and even low power cars can spin their tires easily. With so little grip, having a powerful car isn’t much of an advantage. It doesn’t matter if you’re in a Miata or Corvette, you’re limited to something like 0.3G on snow tires. Under these conditions, the fastest line is surprisingly the early apex (35.86). Sacrilege, I know. Of course, for safety, you should be wary of running out of room at the exit, so you would want a rally or FLA line. More shock, but the FLA line (35.93) is marginally faster than the rally (36.09). Quod the fuck? Well, you can’t make up for lost entry speed when there’s no grip.

I don’t have a tire test for dirt, but 0.6-0.7G seems a likely figure. Here, the power of the car once again affects the optimal line. In a low powered car, such as a Toyota Yaris (see my GRX posts), the late apex (26.38) is the fastest. The rally (26.57) line is only a little slower and much safer at the exit, which probably explains its use by rally drivers. While the FLA (26.93) line is also safe, it’s a good deal slower. As the power of the car increases, the difference between the rally and FLA lines disappear, and eventually (as in snow) the FLA line can become optimal.

The faster the corner, the lower the effective acceleration of the car (because of gearing). So at very high speeds, even muscle cars become momentum cars. And what of momentum cars? If the ability to accelerate is severely limited, such as having to coast through a corner without power (like a skateboard), then there is no advantage to a late apex. While a geometric line might look optimal on paper, it takes power to drive a constant radius corner at constant speed. Although the model isn’t a perfect fit here, let’s revisit the Miata on track (0.3G acceleration, 0.9G grip) and assume that the car is not allowed to speed up between the 1st half and 2nd half of the corner. The results: Geometric 25.34, FLA 25.56, Early 26.26, Rally 28.42, Late 29.40. The Late apex line is terrible. If you don’t have any power, don’t throw away momentum!

The optimal racing line is affected by both the grip of the tires and the power of the car. The late apex line is a good starting place, but it’s not always optimal. Driving a momentum car? Try moving your apex earlier in faster corners. Driving a muscle car? Learn the limit of the car and track. On dirt or snow? Honestly, I don’t think this is a good model for loose surfaces because it doesn’t take into account the advantages of over-rotating the vehicle.

8 thoughts on “Math on the racing line, part 2”